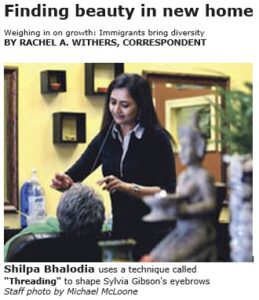 Threading is a hair-removing technique that originated in India. The process involves twisting a piece of thread into a double strand. The double strand is used to remove a line of hair. It is a natural remedy compared to waxing, Bhalodia said.

“Waxing can rip off skin,” she said.

She decided to continue her interest in eyebrow threading by opening Chandni’s Salon, named after her daughter, from the basement of her home.

“It literally means moonlight,” said Bhalodia. Her business became a success and outgrew the basement. “It was unbelievable,” said Bhalodia. Three years ago, she moved her business to Chatham Square. Chandni’s Spa and Salon offers its signature eyebrow threading along with facials, massages, hair cuts, color and waxing.