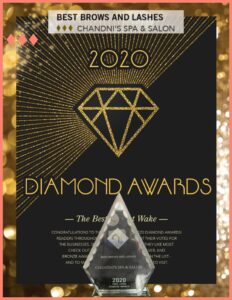 Cary Living readers selected Chandni’s Spa & Salon as the GOLD winner for Best Brows and Lashes in that magazine’s Diamond Award in 2020.

Contest is readers’ choice award, where readers both nominate and then later vote on their favorite providers in a variety of categories. The complete lists of winners appear in January/February 2020 issue.